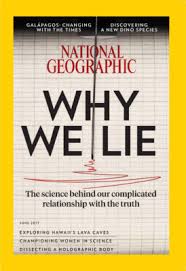 I don’t subscribe to National Geographic although after reading a friend’s copy of the June 2017 issue, I may. The feature article is an in-depth treatise about lying and why we do it.  So, what were my key takeaways as a communicator?

The article gave me some additional perspective about why, when confronting issues, it is often not the facts but the height of the passion or the amount of emotional investments that will help people arrive at a truce or a compromise or simply an ‘agree to disagree’ position.  Lawyers often encourage those involved in controversy to avoid making apologies that could imply guilt because the consequences could be a costly legal battle and fines or imprisonment.

Net, swearing to tell the truth, the whole truth and nothing but the truth is a hard oath to live by – so help me God!